A Quilling tribute to the London Olympics 2012 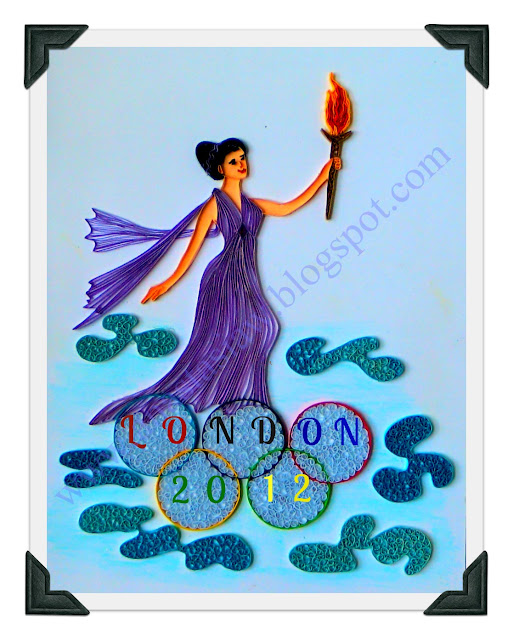 It is the all  important day that not only the athltes but  the entire sporting world and sporting fans were waiting for, London Olympics 2012. This is my entry to the sports theme competition in a quilling group on face book. I wanted to do something different. I love reading history and enjoy all the mythical stories and tales of all countries. Since olympics and Athens are closely connected I wanted to do a quilling  in remembrance of the past and present.
Athena is the name of an important goddess for the Greeks. She is the patron goddess of Athens the goddess of wisdom, a goddess of arts and crafts (agriculture, navigation, spinning, weaving, and needlework), the favorite daughter of her father Zeus, and, as a war goddess with a focus on strategy more than bloodshed, an active participant in the Trojan War. She gave Athens the gift of the olive tree, providing oil, food, and wood. (article from the web)
Since the first Olympic torch is lit by the high priestess in Greece and given out to the world before any olympic games, I wanted to quill something to symbolise this. So hear is my imagination and tribute to all athletes of London olympics 2012. Good luck to all the participants
Posted by Anastasiaw2008@gmail.com at 4:56 AM 15 comments 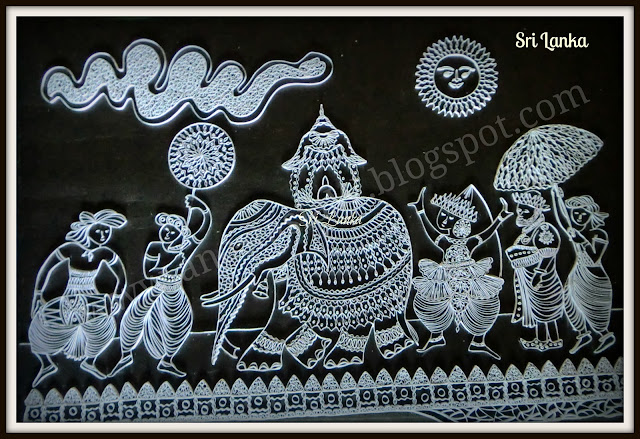 Esala Perahera (the festival of the tooth) is a religious festival held in Sri Lanka and is a very colourful pageant, that takes place in the hill capitol, in July or August. It is a unique symbol of Sri Lanka.  and a Buddhist festival. The colourful pageant consists of dances and decorated elephants with the Majestic tasker(only elephants with tasks are taken) in his full glory, carrying the casket of the sacred tooth relic on his back. The pocession which takes about six or seven hours round the streets of Kandy, takes place daily, starting from the temple around 8pm, for about two weeks before the full moon and ends on the day of full moon.More than 150 elephants and over 500 dancers participate in the procession. There are fire-dances, whip-dances, Kandian dances and various other cultural dances. The elephants are usually adorned with lavish garments. The festival ends with the traditional 'diya-kepeema'.
The Dalada Perahera is believed to have begun when the Sacred Tooth Relic of the Buddha was brought to Sri Lanka from India during the 4th century.
The perahera theme has been done by many artists in paintings. This is my version in quilling


Thank you friends for following me. You inspire me to do better ♥♥♥